Tag Archives: president of the us

Authority Granted to International “Advisory” Board over US Companies 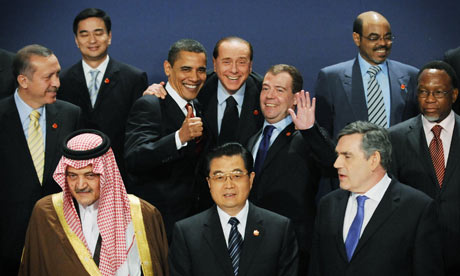 Let’s start right off by getting to the crux of the matter.  I can not say it any plainer than this.  Obama has given an international advisory board authority to dictate processes and procedures to ALL “major” U.S. companies, including banks, brokerage firms, and corporations.  This event just took place at the G20 Summit in London with the full approval and endorsement from our “commander in chief.”

In part of their many accusations of the King of Great Britain, the Founding Fathers declared, “He has combined with others to subject us to a Jurisdiction foreign to our Constitution, and unacknowledged by our Laws; giving his Assent to their Acts of pretended Legislation:”  The Declaration goes on to itemize several different ways the King committed these atrocities including, “For suspending our own Legislatures, and declaring themselves invested with Power to legislates for us in all Cases whatsoever.”  Further the signers of the Declaration loudly proclaimed, “That these United Colonies are, and of Right ought to be, FREE AND INDEPENDENT STATES;”  Additionally, our Founding Fathers declared on behalf of all American citizens, the sovereignty of the United States of America from all other international powers or authorities (Sovereignty means autonomous, freedom from external control).  Understanding these points will help you realize the magnitude of this national crisis which has just recently occurred.

In London, at the G20 Summit President Obama made an official declaration to treat such sovereignty as non-existent!  This is really serious stuff, folks. He has endorsed and agreed to be subject to an INTERNATIONAL advisory board.  This board is to have power over U.S. banking systems, brokerages firms, and even corporations—including automotive companies.  This global regulator, known as The Financial Stability Board, now has authority to oversee operations of these entities to determine financial risks.  In addition, they have the authority to set policies in these corporations, including compensation packages.  This means that this private boards of directors will be authorized to examine companies and decide what to pay top executives and senior managers.  Access of this international authority will now make global regulations regarding any practice by any banking, brokerage or business by a major U.S. corporation.  And the Financial Stability Board, on its own authority, will determine what is or is not unduly risky.

While many have reason to be seriously concerned with our “own” Federal Reserve making loans to banks and corporations due to the sweeping power that such loans give our government and the Federal Reserve, imagine now what will undoubtedly occur when the IMF is put in charge of giving loans to these exact same U.S. companies.  This is yet one more step towards us losing our nation and having it swallowed up in a Godless Global Tyrannical Government.  Think I’m exaggerating?  This new agreement gives IMF (International Monetary Fund), in concert with The Financial Stability Board, the ability to become global regulators over the ENTIRE corporate world.  Their power will SUPERSEDE all U.S. governmental authorities, including the Federal Reserve, the U.S. Treasury, the Federal Deposit Insurance Corporation and a host of corporate regulators, including the U.S. Department of Commerce and the U.S. Department of Labor.  This is clearly one more step towards a global currency, which brings with it global power, and an abolishment of any republic.  The U.S. will be a part of this board but with only ONE vote.  Additionally, there is absolutely no appeal procedure specified by the G20 in the event that any determination by the board is contested as incorrect or unfounded.  What this means folks, is that this could begin “just” as a global regulatory board, but could quickly move into any other authority it deems fit without any recourse but war.

Are you concerned yet?  Tough.  This isn’t a proposed bill before any of our legislative branches.  There aren’t any hotlines to call and express our disgust with the President’s decision.  This is simply how it is.  In spite of the fact that he has taken an oath to uphold the U.S. Constitution he’s subjected our nation to international law.  The President of the United States has spoken on behalf of ALL of our businesses, all of our citizens, in agreeing to this proposal at the Summit.  It’s a done deal folks.  The ONLY thing we can do is to make perfectly clear our disgust for his actions.  And as harsh as it may sound, this message of disapproval may only get through if the president is impeached.  While this may sound quite radical to some, ask yourself, how much further does he have to go, how many more mistakes must he make, how many more freedoms must be trampled before such impeachment actions are justified?

I implore you to read the U.S. Constitution and the Declaration of Independence – prayerfully.  I implore you to make your personal prayers, the lessons in the scriptures, and these inspired documents as the guiding influence on your decision as to when enough is truly enough, and what should YOU do about it.  I certainly never thought I’d be writing these words, but then again, I never thought that our country would be sold away in the manner it has for so long.  President Marion G. Romney said, “While it is more difficult to live the truth, such as standing for free agency, some of us may in the not too distant future be required to die for truth. But the best preparation for eternal life is to be prepared at all times to die—fully prepared by a valiant fight for the right.” (First Presidency Message, Ensign, October 1983)

May we prayerfully decide what must be done, and then may we be blessed with His strength to do so, and not allow such heavenly instructions fizzle with the first sign of challenge to our resolve.